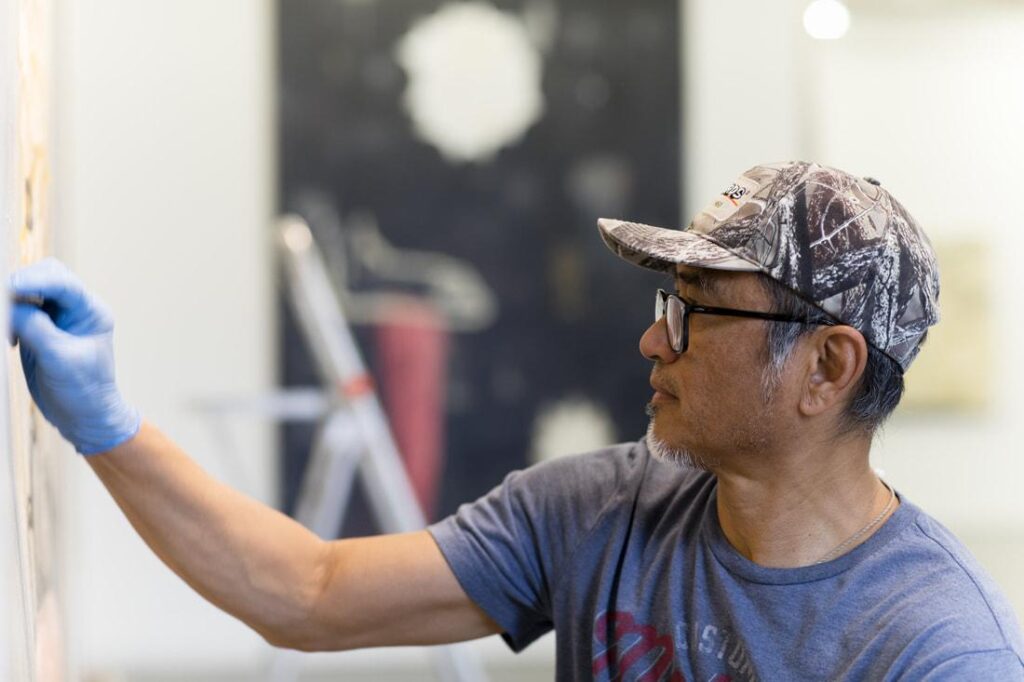 John Yoyogi Fortes is a painter whose work explores a physical and psychological landscape though self, culture, and identity.  Drawing from multiple sources like Filipino culture, comics, pop culture and art history, John’s paintings are often a obscure world wrapped in an amalgamation of artistic styles, dark humor and word play.

John’s work has been exhibited throughout the U.S. as well as Hawaii, Venezuela, Japan, the Philippines and Norway.  His paintings are held in numerous private collections including the Asian American Art Centre in New York, the Nevada Museum of Art, and the Triton Museum of Art and Crocker Art Museum in California.  His work was included in the International Arts & Artists traveling exhibition, Infinite Mirror; Images of American Identity which opened at Syracuse University in New York, traveling to museums and universities throughout the Eastern United States.

Fortes has received grants from the Sacramento Metropolitan Arts Commission and the California Arts Council.  He was awarded a Joan Mitchell Foundation Painters and Sculptors Grant and nominated twice for the Alliance of Artists Communities, Vision from the New California Project.  John has been an artist in residence at the Bemis Center for Contemporary Art in Omaha, Nebraska and the Joan Mitchell Center in New Orleans, Louisiana.

Born in Tokyo, Japan, John’s family migrated to San Francisco, California when he was five years old.  He attended California State University, Fresno where he studied under artist and musician, Terry Allen and conceptual artist, Charles Gaines.  John currently lives with his wife and daughter in Sacramento, California.

Artist Statement:
Ever since I decided to pursue art as a career, I’ve always been curious about who I was as an artist and my connection to the work. It wasn’t until I began painting about my father’s struggle with Alzheimer’s and then using my Filipino background as a source to inform my art that I realized I was on this mysterious journey of self discovery.

The underlying theme of my artwork is self-examination, attempting to bridge my internal and external experiences shaped through a bi-cultural lens. In the context of my work, I view culture as an organic form that changes through the acquisition of new ideas and new imagery, much like immigrants accumulating material possessions, symbolic of their cultural assimilation.

In my paintings, the idea of assimilation presents itself as a littering of images and text that over time gain meaning, though nothing remains an absolute for me. From monkey faces, a racial slur directed at Filipino immigrants in the 1920s and 30s, to deconstructed figures and forms, which suggest, “Trying to get ahead” or “not having a leg to stand on,” these images all meet barriers. Brick walls, boulders and other forms impede any forward momentum, a nod to pressures placed on ourselves to succeed, or to fit into the homogeneous whole. It’s a pictorial instant that’s both volatile and playful, where all the parts are frozen to work things out in their own purgatory. Attempts by me to activate the painting come from color placement, quality of line, how paint is laid down, or the juxtaposition of the paintings character to other forms.

All this layering, both psychological and physical, manifest as an amalgamation of iconography borrowed from many sources: American pop culture, Filipino culture or even the collision of cultures. If my paintings beg to tell a story, it eventually surfaces through my art making process. It’s a narrative that defines who I am as a Filipino-American and adds to my history as an artist.

Ultimately, I’m interested in seeing how these ideas about self and society play out on canvas and the transformative journey experienced through the art making process. Ironically, the barriers that I navigate are no different from those barriers a viewer experiences should they choose to have a relationship with my work.

We use cookies to ensure that we give you the best experience on our website. If you continue to use this site we will assume that you are happy with it. Ok